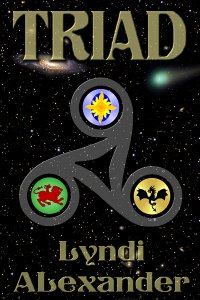 On the planet Induna, Trezanna Len leads the Solarii, a small colony of beings, human and otherwise, who believe in the right to pursue a peaceful life free from interference from others. She’d never intended to be the one people counted on,  but after she’d been dismissed from her unit at Space Force, she’d drifted along till she found this place mostly populated with travelers from the Terran Diaspora. She’d been welcomed and made comfortable; now she believes the Solarii should do the same for others seeking shelter.

Of course, no situation is free from trouble. The thorn in Trezanna’s side is another group on a neighboring planet, Miramar: Dragonfleet.  Always contentious, this group has become even more aggressive after the ambitious climb to power of Estrella Drake. The unbalanced and self-centered Estrella has lost many of the former Dragonfleet members disillusioned with her petulant rule, including an organized splinter faction called the Khimeyr, who left five years ago.

Trezanna has been able to handle Estrella’s little incursions into her space, marking them up to the price to co-exist. The exercise keeps her pilots and fighters in good practice. This turns out to be a blessing when the well-armed Arkosian space pirates decide they’d like to take the sector that includes both Miramar and Induna. But Trezanna’s Solarii cannot handle this attack on their own. 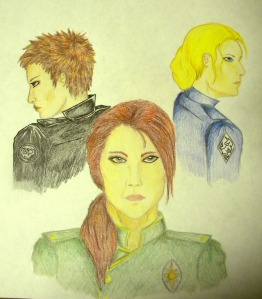 From top left, Estrella Drake of Dragonfleet, Catava Rolon of the Khimeyr, and in foreground, Trezanna Len of the Solarii

The last time the pirates entered this area of space, Dragonfleet and the Solarii stood together to repel them, but that’s when cooler heads ruled at Miramar.

Help comes from a most unexpected source, but one that has its own hidden agendas. Three women, Trezanna, Estrella and Catava Rolon, must work out their differences if they are to defeat the pirates and survive.

TRIAD is a 2012 release from Dragonfly Publishing, Inc.   , available in ebook, paperback and hardback. at Amazon.com, Barnes and Noble.com, most other web sources, and can also be ordered through your local indie bookseller!

If you like the insignia of these three factions, you can order them in patches or keychains, even on mugs and T-shirts, from Cafepress.

Thanks to Cierra Fromknecht for the beautiful character drawing!

This site uses Akismet to reduce spam. Learn how your comment data is processed.