The sadness of being relevant: White Supremacy isn’t history, friends

Authors often agonize over whether their books will remain relevant, especially those who write young adult stories and others that use a particular setting or set of jargon to make their points. Even as I wrote the Color of Fear series, critique mates would point out the use of SoCal cadence in Valery Paz’s “Valley Girl speak,” and pop culture references in the banter of electrogeek Eddie Garrick. (It’s true, though–you can’t stop the signal.)

The series tells the story of a world hit by terrorism, and the apocalyptic plague that has wiped out most of the Caucasian population of the world. Mixed blood has

saved some whites, but the majority of the survivors, especially in the hard-hit United States, are people of color. Blacks. Native Americans. Asians. Hispanics.

While those people are trying to recover and pull together the remains of the shattered nation, from out a concrete bunker in the northwest comes Bernard Ellison, the self-styled Gabriel, a ideological brother-son of the Posse Comitatus, the American Vanguard and other white nationalists. Gabriel commandeers an abandoned radio station and broadcasts to the faithful:

“How long, my friends, have those terrorists been watching and listening to our communications, so that they knew precisely when to strike? Bin Laden and his people clearly read our country’s weakness. The Universal Jihad Front that launched the Second Holocaust, they, too, understood how far our leaders had left us vulnerable. Listen to this.”  He played the government spokesman’s clip Eddie had played on his show a few days before. “Does that sound like a government that can protect you, my friends? I think not!

“Without a strong, healthy government to keep those foreign devils off American ground, do you believe they just stayed home and played in the sand? How do we know they didn’t take advantage of the apocalypse to begin landing ships on our unprotected shores, spilling thousands of them out to take your wives and daughters? Will they recruit those of color who survived in this land? They are banding together, taking aim at the real Americans who are left.”

The propaganda-filled diatribe paused for a moment, then continued, “My friends discovered a nest of potential murderers right here in our heartland just last night. We’d tried to contact these rebels, to show them the truth, but instead, they returned threats and violence. They ruined a major highway!”

A note of stricken sadness came into his voice. “Now crossing our great land will be so much more difficult. Why do these people insist on destroying the world?”

At about the same time in the story, a small band of people trying to get to St. Louis, where the new capital is forming, have this conversation with a ham radio operator who’s keeping them informed of the state of the nation:

“KC-five-NXS, yes, I’m here.” Hang settled onto the floor in front of the radio as the others gathered around. “Thanks for getting back to me. I wanted to let you know we’re going to be delayed—”

“What? I don’t think you can wait any longer, son. Word came down this morning that Gabriel’s on the move. His people set off explosives all along the stretch of I-Eighty between Omaha and Lincoln, knocking out the road. It’s impassable.”

San eyed Charlie, his worst fears coming to life. Yeah, I do know what I know, fool. “We need a map,” he said.

“I got one in the truck,” Terry said, and he hurried out.

“Why would he do that?” Hang asked. “Don’t his people need to get around, too?”

“Word has it that some groups in the two cities planned to set up a blockade, aiming to take Gabriel out. Apparently he just got the jump on them. He’s celebrating on his damned station, claiming the other side was the attacker. I’m not sure how much of what he says you can believe, but we’ve got confirmation from our men on the ground that there are plenty of dead, and they aren’t Gabe’s people.”

“Whoa.” Deflated, Hang leaned back against the bookshelf where the radio sat.

“How many dead?” Marie asked.

“Reports range from just a few to hundreds, depending on who’s telling the story.”

Terry came back with the map, and they spread it out on the table. Mere inches separated Lincoln from their intended route on Interstate Seventy, inches that translated into only one hundred and seventy miles. And they still had three states to cross moving east.

Sound familiar? Does it sound like “Many sides” are at fault? How much more relevant can you get?

THE COLOR OF FEAR SERIES from Zumaya Publications and Lyndi Alexander

Terrorists launch a plague in the United States that spreads to kill most of the world’s Caucasian population. As the deadly bioweapon mutates, Tzu Lin Kwan’s father, a renowned medical doctor and biologist, defects from China to

help develop a cure. His  only daughter, Lin Kwan, is left behind in Hong Kong with her aunt.
Then Kwan’s father summons her from across the sea to bring him Chinese medicinal herbs. Lonely and missing her parents, she accepts the challenge, traveling with her sensei Li Zhong to the New World.
But a Chinese spy is on her trail, determined to kill her and Li Zhong, and when Kwan discovers her father has disappeared, she sets out on a journey to find him and deliver her precious cargo, a quest that she may not survive.
Buy it here!   Find out more and see some excerpts here and here and here.… and another posted by Sharon here !  And a really nice one by Sandy Dailey here.
For an interview with Lin Kwan, see the blog with Sharon Buchbinder here. So many choices she has to make, and they can mean life and death for the world.
NOW AVAILABLE!! Book Two in the series–DESTINATIONS! 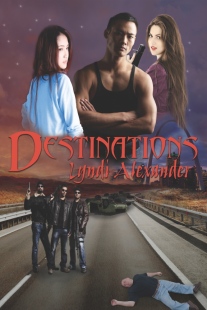 Xi San saved the life of a mysterious girl one night in his ravaged San Francisco neighborhood. He can’t get her out of his mind, but believes that she’s lost to him. Lin Kwan came to America to bring her scientist father Chinese medicinal herbs, hoping to stop the virus that killed most of the world’s Caucasians before it mutates to infect the rest of the world. On her way to finding him, she meets again the man who once saved her, a man she can’t forget.With a diverse group of fellow travelers, they head for St. Louis, where civilization is being rebuilt. Between them and safety, danger lurks—Gabriel, a self-styled religious leader and white supremacist, who has organized his army from Upper Midwest survivalist and militia followers, determined to take revenge for the white man.

But Gabriel isn’t their only enemy. Before they reach their destination, they will battle nature, prejudice and even those hidden among them who wish their destruction.

Now available at Amazon.com and other online booksellers. Or place an order through your local indie bookstore!

After terrorists unleash a virus on the world that kills most of the Caucasian population, Lin Kwan has finally found her scientist father in America and can deliver the precious herbs he asked her to bring from China. But their reunion is nothing like she expected.

Survivalist and white supremacist Gabriel leads his army of Angels against the new U.S. capital of St. Louis, determined to punish those who lived through the horrors of the virus and re-establish whites as the ruling class. He plans to tear out the heart of the city by first destroying its heroes, then negotiating its surrender.

Xi San, Valery Paz, Eddie Garrick and the other survivors rally to fend off Gabriel’s attack, only to find their city under siege from a much more insidious opponent–the remains of the federal government bureaucracy, which insists on taking control.

And assassin Jin Piao has never been closer to his objective, now that Kwan, her father and the healing medicines are within his grasp. Will he follow his orders and kill them, to save his own wife and child?

Comments Off on The sadness of being relevant: White Supremacy isn’t history, friends

The release of the second book in the Color of Fear Series–DESTINATIONS!

Xi San saved the life of a mysterious girl one night in his ravaged San Francisco neighborhood. He can’t get her out of his mind, but believes that she’s lost to him. When an old friend invites him to St. Louis, the new center of terrorist-decimated America, he leaves his old world behind.

Lin Kwan came to America to bring her scientist father Chinese medicinal herbs, hoping to stop the virus that killed most of the world’s Caucasians, before it mutates to infect the rest of the world. Following his trail, she meets the man who once saved her, and repays her debt.

Gathering diverse companions as they travel toward St. Louis, the two encounter deadly obstacles, including Gabriel, a self-styled religious leader and white supremacist determined to take revenge for the white man.

But Gabriel isn’t their only enemy. They have to battle nature, prejudice and even those hidden among them who wish their destruction.

Also available through Amazon.com, Barnes and Noble.com and other online sources.  From Zumaya Publications–get your copy soon!