Snowed in? Come win a ghost story by Kelly Moran to curl up with!

Please welcome as our guest author today, award-winning author Kelly Moran. I’ve followed her for several years on Facebook, and she always makes me laugh–but her new book,  THE DRAKE HOUSE, brings with it a strong set of chills, not giggles. One commenter will win a free ebook, so leave your information!

Kelly’s been known to say that she gets her ideas from everyone and everything around her, and that there’s always a book playing out in her head. No one who knows her bats an eyelash when she talks to herself.

She began her writing career in the Indie market, becoming the recipient of an Editor’s Choice Award, a Finalist in the 2008 Best Book Awards, and a Finalist in the 2009 Indie Excellence Awards before moving into traditional publishing. Her books not only have honors from the top review sites, but from NY Times bestsellers too. She is a respected reviewer and a Romance Writers of America member.

Kelly’s interests include: sappy movies, MLB, NFL, driving others insane, and sleeping when she can. She is a closet caffeine junkie and chocoholic, but don’t tell anyone. She resides in Wisconsin with her husband, Darren, three sons, Logan, Evan, & Ethan, and her black lab, Willow. Most of her family lives in the Carolinas, so she spends a lot of time there as well.

In her dreams, a ghost demands to be heard…

Once plagued by mysterious nightmares, Trisha Eaton always chalked them up to childish nuisances–until they return with a vengeance. Something about the Drake house next door haunts her, and now her night terrors and sleepwalking seem to be luring her to something dark. After a series of strange events, Trisha turns to Nick Mackey. As the new deputy in town, Nick wants to forget his traumatic past. His undeniable attraction for Trisha has him wondering if a shot at a normal life is possible. But Trisha has somehow struck a nerve in their small, superstitious town, and a long-buried secret threatens to surface again. A secret that someone will kill to keep veiled. Answers only lead to more questions in a case where nothing makes sense, but one chilling fact remains…some nightmares are all too real.

Her voice was inviting when she wasn’t mad at him. Like hot cocoa on a frigid day.

“You should smile more often,” he claimed quietly, glancing ahead at the orchard approaching.

She halted abruptly and tilted her head as if contemplating how to respond. “I smile all the time,” she said. No hint of irritation now.

Clearing his throat, he said, “I meant at me. You should smile like that more often at me.”

He couldn’t believe he said it. There was a very long awkward silence as she studied him, brown eyes widened. Talk about feeling like an idiot. Finally, she let out a laugh, smooth and rich from someone so small. She wove her arm through his affectionately like he’d seen her do with others and kept walking.

“Give me a reason to smile and I just might.”

“I’ll take it into consideration,” he mumbled. He already had. From the first moment he walked into her house tonight, he’d been considering her. Before, really, but why argue semantics.

Time to get down to earth 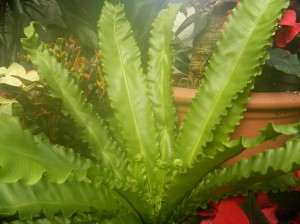 Lest anyone thinks I spend all my days wandering among the stars with Captain Temms Rogers or Catava Rolon and the others, I must clarify that there is plenty of inspiration here on this planet.

One case in point is the beautiful Biltmore Estate in Asheville, North Carolina–most specifically the gardens there. I could live in the conservatory. No, really. I could. Well, if it had a refrigerator. And a hotplate, at least. And maybe a pillow. But it is, for me, the most appealing place on the estate. (A sure second would be the solarium inside–if I’d ever lived in the house, I could have spent most of my time right there taking in the sun through the overhead glass, surrounded by tropical plants.)

We went at Christmastime this year, so the usual plants were visited by hundreds of poinsettias in all colors. The red and green theme filled the steamy rooms.

We’ve visited in the summer before, and there are beautiful rose and azalea gardens and layouts fashioned on international themes, such as the Italian Garden, or seasonal gardens like the tulip extravaganza. But for me, there’s something special about the hothouse blooms.

I imagined my grandmother would have had a grand old time here. Some of her favorite plants around the Indiana farm where she lived had come from her travels around the country.  She’d proudly tell us about her visits to Washington or Chicago and how she just had to “tie her shoe” right next to a plant that she really admired. Lo and behold, a little clipping would end up in her jacket pocket for her to take home and propagate. Awesome!

One room in particular features orchids of every shape and size.  Cattleyas, dendrobium, phalaenopsis and so many more delight the visitor at every angle. I was traveling with our exchange student Yurie, and we both fell in love with these odd little blooms (below) that looked like dwarf faces with beards: 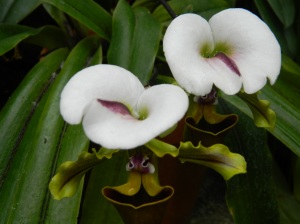 The site has inspired me so much, of course, that I’ve included it as a setting for a scene in one of my books, THAT GIRL’S THE ONE I LOVE (written as Alana Lorens).  I’d gladly go back and visit any time, and I’m fortunate that my daughter and her fiancee work for the Biltmore company so we have a reason to go there a few times a year.

I highly recommend it if you get a chance. Just take a seat in the large open greenhouse and breath deeply, taking in the scent and sight of the beautiful plants around you. I guarantee it will inspire you, too! 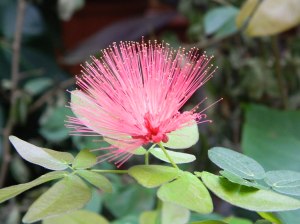 Another clip this week from THE ELF GUARDIAN–

Once this paranormal investigator gets hold of the idea of studying the Montana Vortex, she’s determined to come to the Bitterroot forests, which strikes fear–or at least serious concern–into the hearts of those humans fortunate enough to know the elf clan.

Crispy in particular is worried that the new prince could be a target, since the royal family had almost lost him to kidnappers once. But Lane, in his usual laid-back way, sets Crispy straight about it here:

“Have you ever seen this woman?” Lane dropped the letter onto the desk and turned to the second of his four slaved computers, and ordered it to search for the lame investigator’s show.

Avoiding the lens of the web cam, Crispy edged closer to peer around the corner at the monitor’s wide screen, which displayed a woman who could have walked a Hollywood red carpet, tall, platinum blonde, wearing heels four inches tall and a skirt that didn’t seem much longer, if the expanse of leg in between was any indication.

Lane found his eye distracted by those legs, especially because the photo was shot at an angle as if the cameraman was kneeling down low—not an “up-the-skirt” angle, something a little more “queen of the world.” He didn’t know much about fashion, but the jacket and skirt Chiara wore had that bland, useless look in an off-green color that had to mean it cost twice as much as any normal person would pay for it.

Besides, I shop at the Salvation Army—what do I know from looking beautiful?

He rolled his eyes.

“She’ll fall down in the woods,” Crispy commented.

“In those shoes? You betcha.”

Find out more about THE ELF QUEEN, THE ELF CHILD and THE ELF MAGE at the tabs above, or at http://clanelvesofthebitterroot.com. You can buy the books at Amazon.com, Barnes and Noble.com and a host of other sources–find them at Dragonfly Publishing, Inc.   The Elf Guardian is expected out this spring. Can’t wait!

I  just got tagged in The 777 Meme, which is very much like the Lucky 7 meme from last year. Thanks to Heidi Ruby Miller for tagging me.

THE RULES:
1. Go to page 77 of your current ms.
2. Go to sentence 7.
3. Copy and post the next 7 sentences as they’re written. No cheating.
4. Tag 7 other writers.
Here’s an excerpt from A SMALL DEGREE OF HOPE,  the science fiction shapeshifter romance coming out from Lyrical Press later this year. In this scene, reptile Griff has just escaped from a lab, with the altered Kylie in tow. Her former law enforcement squad awaits them outside and doesn’t like what they see.
—

The human in front, a squat, balding man just stared, his jaw dropped. “What in Sprechan’s name is that?”

“This is Kylie Sanderson,” her male said. “She has been transformed. I can help, but only if we are quickly taken to a medical facility.”

One of the other men, his gun trained on them, called out, “That’s bullshit, Jaco. He’s just saying that so we don’t turn him into a piece of luggage right now!”

DESCRIPTION:
A SMALL DEGREE OF HOPE is an evolution from the paranormal romance genre, with the shapeshifting hero not a vampire or werewolf, but an alien reptile who’s come to stop his fellow aliens from kidnapping human women and changing them into mindless reptile baby machines.  Heroine Kylie Sanderson is an agent with an elite force investigating the abductions, who ends up much too close to the action.

Kylie Sanderson is a lead investigator studying a string of deaths on the planet Andan, where young women have been found, discarded, partially mutated into green, scaly reptiles. In the course of the case she meets Griff, a man who knows much more than he should about the murders. He turns out to be not a man at all, but a shapeshifting alien reptile from a planet where reptiles evolved into intelligent beings instead of mammals.

She learns more than she ever wanted to about these aliens when she is captured and transformed into a female reptile herself. When Griff rescues her, this launches the two of them on a hot-fueled race on the wrong side of the law to thwart the aliens’ plan to convert women into breeding lizard females.

No other human female has survived the transformation, and in finding out why she did, Kylie uncovers long-hidden family secrets that doom her sister Nissa to be a victim of the reptiles as well. Rejected by her family, her friends, and even the rest of her police team, Kylie comes to depend on Griff as her sole support. But is he  her savior or is he leading her back into the clutches of the reptile labs?
—
TAGGING:
Travis McBee
Bertena Varney
Tony Acree