I  just got tagged in The 777 Meme, which is very much like the Lucky 7 meme from last year. Thanks to Heidi Ruby Miller for tagging me.

THE RULES:
1. Go to page 77 of your current ms.
2. Go to sentence 7.
3. Copy and post the next 7 sentences as they’re written. No cheating.
4. Tag 7 other writers.
Here’s an excerpt from A SMALL DEGREE OF HOPE,  the science fiction shapeshifter romance coming out from Lyrical Press later this year. In this scene, reptile Griff has just escaped from a lab, with the altered Kylie in tow. Her former law enforcement squad awaits them outside and doesn’t like what they see.
—

The human in front, a squat, balding man just stared, his jaw dropped. “What in Sprechan’s name is that?”

“This is Kylie Sanderson,” her male said. “She has been transformed. I can help, but only if we are quickly taken to a medical facility.”

One of the other men, his gun trained on them, called out, “That’s bullshit, Jaco. He’s just saying that so we don’t turn him into a piece of luggage right now!” 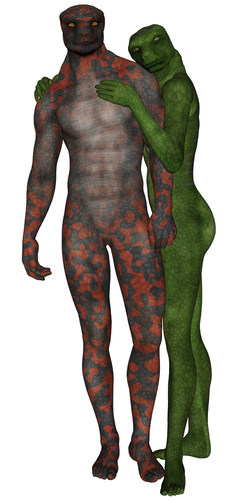 DESCRIPTION:
A SMALL DEGREE OF HOPE is an evolution from the paranormal romance genre, with the shapeshifting hero not a vampire or werewolf, but an alien reptile who’s come to stop his fellow aliens from kidnapping human women and changing them into mindless reptile baby machines.  Heroine Kylie Sanderson is an agent with an elite force investigating the abductions, who ends up much too close to the action.

Kylie Sanderson is a lead investigator studying a string of deaths on the planet Andan, where young women have been found, discarded, partially mutated into green, scaly reptiles. In the course of the case she meets Griff, a man who knows much more than he should about the murders. He turns out to be not a man at all, but a shapeshifting alien reptile from a planet where reptiles evolved into intelligent beings instead of mammals.

She learns more than she ever wanted to about these aliens when she is captured and transformed into a female reptile herself. When Griff rescues her, this launches the two of them on a hot-fueled race on the wrong side of the law to thwart the aliens’ plan to convert women into breeding lizard females.

No other human female has survived the transformation, and in finding out why she did, Kylie uncovers long-hidden family secrets that doom her sister Nissa to be a victim of the reptiles as well. Rejected by her family, her friends, and even the rest of her police team, Kylie comes to depend on Griff as her sole support. But is he  her savior or is he leading her back into the clutches of the reptile labs?
—
TAGGING:
Travis McBee
Bertena Varney
Tony Acree